A photo round-up of our December 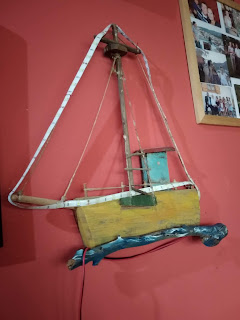 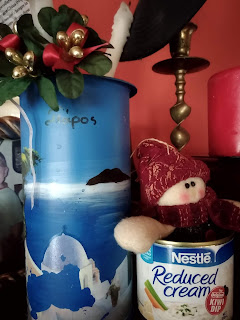 Just for fun
an empty can of NZ reduced cream, essential for the classic kiwi onion dip, brought 12,000 miles in a suitcase.  I suppose I'll have to throw it into the recycle bag eventually.  Now it sits nicely beside the very classic wine jug from the island of PAros 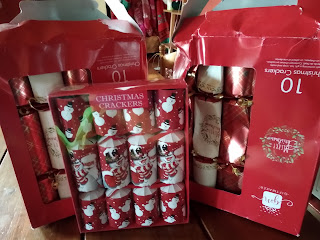 English Christmas crackers.  Everyone in the family loves these.  This year I remembered early and ordered from Ebay.  20 crackers for a very reasonable 18 euro and that included the postage.  The boxes are a bit battered but hopefully the crackers will still go bang when they are pulled.  The smaller box is from a big greek shopping chain.  I was in early there too though I doubt they'll sell out.  Xmas crackers seem still to be on the mostly-unknown-foreign list. 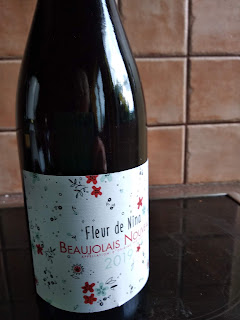 Beaujolais and from 2019.
I love a bit of beaujolais but usually the bottles in the greek supermarkets are from the previous year and I know this wine is supposed to be drunk young 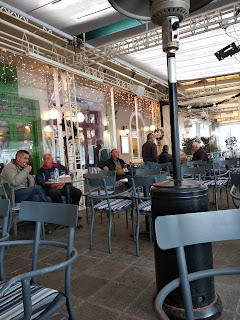 Downtown all the cafeterias have some sort of Xmas decoration
The streets at night have lights on the lamp posts in the shapes of trees and stars.  Most impressive this year. 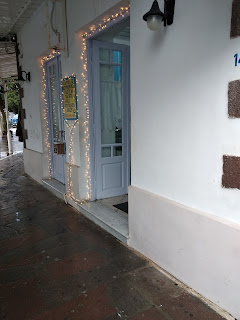 This is the local almond-biscuit making shop.  omg the smell wafted along the waterfront, how could I resist.  But I did.  My traditonal partner was in a hurry to make home before the next 'falling of chair legs' as they say here.  Dark clouds were encroaching, rolling down over the hills opposite 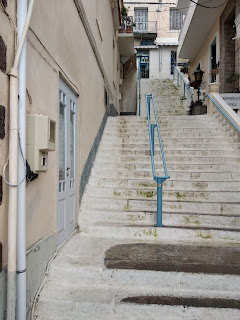 Steps green with moss.  They'll be whitewashed by the municipality before easter next year 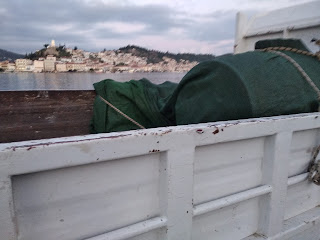 We came home last weekend on the car ferry with son-in-law's family oil and wine.  The family have olive trees and grape vines in a small village further north.  A cousin looks after the fields, vines and trees, does the harvest and sends part of the yield down to the family on Poros.
Posted by local alien at 05:07:00