Well, ho, ho, ho. Christmas is almost here.  Father Christmas knocked on our door this morning bearing gifts, dressed in his old track suit pants and sweatshirt.  His official red suit is hanging up over the fireplace and Mrs Christmas has given him strict instructions to leave it there till Christmas Eve.  She's not going to iron it again or remove the oil stains .  Around here Santa is rewarded with a glass of fire water and some fatty pork after these early Xmas runs. Things can get messy. 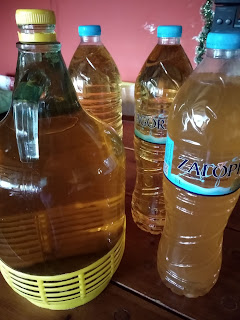 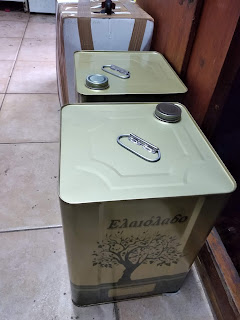 Followed by 2, 16 litre tins of this years olive harvest, pressed two days ago.  Buy 1 (70 euros), get one free.    The bursting cardboard box in the rear is 20 litres of son-in-laws wine from last year.  He was clearing out his barrels for this years vintage.  I think we'll be having a very happy Christmas, this year.

Vaso's son and our 'koumbaros' (we were best man and woman at his wedding) brought us wine and oil before he left for Athens to join his wife's family for Christmas and New Year.

Athens is rather jolly at this time of the year, not a bad place to be if you want shops lit up with Christmas lights, windows with dancing Santa's and piped music in the squares and parks.

Their oil harvest has finished for the year.  It's time to enjoy some R and R.  Today they finished the last of their chores, cleaning the nets used for the olive picking and the olive and  oil containers.
85 year old Vaso was out in the fields dragging pruned olive branches into piles and burning them.  She never stops.  Probably on Christmas day she'll be out there burning or weeding though she has been known to pop in for a drink and a smoke.

Our presents are wrapped, the stockings have been mostly filled and I'm knitting non stop to finish 5 pairs of wristwarmers for the grandchildren.