Big election day today.  Election days are always on a Sunday.  Most greeks go back to their village, their roots, to vote.  Everyone goes back to their families, the island fills with Poros people from ages past.

Schools close down for a four day weekend,  No school on the Friday preceding and the Monday following.  Schools are used as polling booths but also it lets the teachers go home to vote.  If there are follow up elections then they'll be closed for 4 days the next weekend as well.

This time there will be multiple polls for the Euro-parliament, the District Council and for  the Municipality (The Mayor and Councillors). 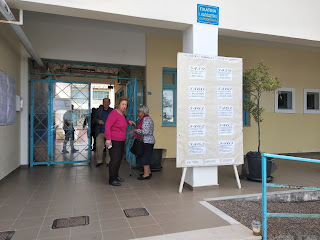 We always come down early to avoid the crowds.  Longer lines begin to form when everyone comes out of church and comes down to vote and when the first boat and hydrofoil bring in locals from Athens and Piraeus. 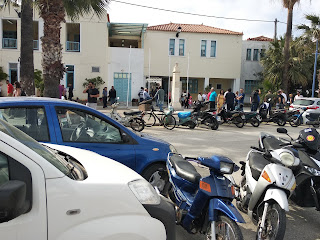 All the candidates form up outside the polling station and there are 'camps' on both sides of the road where the two Mayoral candidates and their followers sit.  We are accosted by 'handshakers' from both sides, all hoping they'll get our vote.

I slip in and out with a couple of 'yiasous' to both sides but K always gets caught and promises all and sundry that he'll vote for them.

Then can be a lot of nastiness if you're considered to be on the 'opposite' side especially in local elections.  Jobs have been lost.  One taverna owner refused to serve 'perceived'  backers of the other party.  Small town back stabbing at its worst and believe me there's a lot of that on this island.  This is not paradise at all.

There were 38 parties contesting for Euro-parliament seats, 38 big pieces of paper to sort through in the voting booth.  A real hassle.  I always slip the extra voting papers into my bag so I've got note paper for the next few years.  I'll have enough paper this time to last till the next elections in four years time!

17 year olds are voting for the first time and that includes my oldest grandson.  17 years old!  Soon he'll have to do his compulsory military service too. 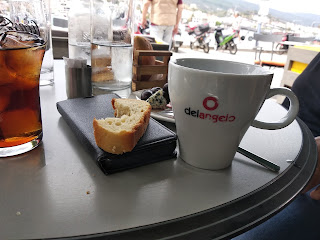 After voting we went out for coffee of course and got stuck in long discussions.  Once the sun was over the yard arm some of us thought about having something a little stronger.  Years ago there was no alcohol served on election days to stop inter-party fisticuffs.
At cafeterias any alcohol  (back then it was all the craze to drink whisky) was served in coffee cups to fool authorities.  K's ouzo was served to him in a coffee cup today as a joke by his good friend and cafe owner.

Results aren't in yet but it looks as though the ruling party has lost a lot of support.  Maybe we'll be having general elections soon too