I got my Hail and Thunder post, or a copy of it.  Thanks to my cousin J down in New Zealand who sent me an email which included the blog post.  Probably quite a few of you read it and thanks to those who commented.  The comments were lost as well but I did read them before they vanished.

April storms.
Unexpected.  Fierce.  Just like the one that sank the Edmund Fitzgerald, except that was in November

'The legend lives on from the Chippewa on down
of the big lake they call 'gitche gumee'
The lake, it is said, never gives up her dead
When the skies of November turn gloomy....'

Back here on a little Greek island where the sun shines and the people dance, sing and munch on greek salad and moussaka, April has been 'astatos', 'fickle' says google translate.  If fickle means wet and soggy then fickle is the word.     We have had mornings of brilliant sunshine and afternoons of rain, hail and thunderbolts straight from  Zeus up there in his lair on Mount Olympus.  Rain, hail and thunder.  The last storm was so violent it shredded the garden and flooded the spare room.

At the first rumble we unplug the router and usually the fridge as well.   Violent lightning flashes and overhead thunder claps  have blacked us out, cut off phones and shaken our nerves 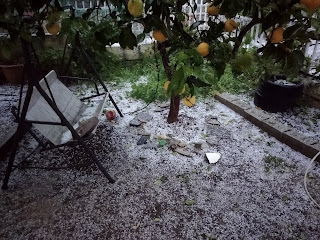 The last storm brought the clatter of hail, big balls of ice which covered the ground and turned vegetables and grape vines into tatters.  A few kilometres away down  in the harbour they had only a little rain.  Isolated thunderstorms with periods of sunshine.  Today it was their turn for the hail and  not even a drop of rain up here in the hills. 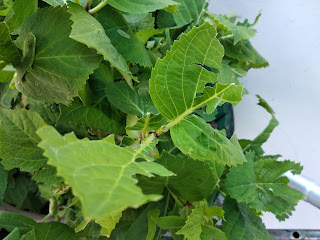 My hydrangeas were thick, green leafy bushes.  Now the leaves are in tatters and the flower buds damaged but not completely destroyed.  I'm waiting to see what a few days of sunshine might do to them.  No more storms are forecast for the rest of the week.  But who believes the forecasters?

My NZ 'real' pumpkin seeds haven't sprouted.  I planted some straight into the garden and others in more sheltered pots.  They have probably rotted in the soggy soil.  Today I planted three more seeds in a small pot and placed them on the kitchen window sill.  If they don't sprout then I have three seeds left to try again when the first heatwave hits us.

The grapevine is hanging it's head(s), the peppers, aubergines and zucchini looking very sad, but, I'm hoping mother nature will bring them back to life.  My nasturtiums look limp and downtrodden, no longer the vibrant picture of green and orange that made me so happy.   I try to keep the nasturtiums alive and green as long as possible in the summer heat. 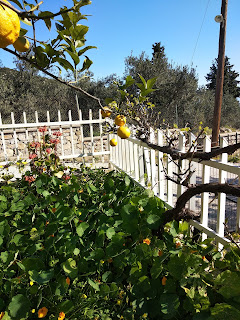 Nasturtiums before and after 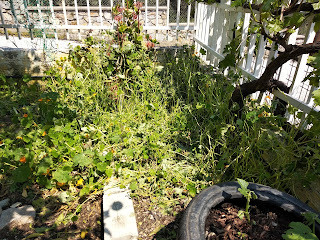 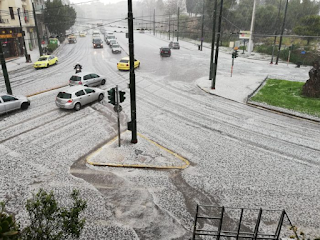 
The Acropolis got a direct lightning hit yesterday. Four people, tourists  and guards were injured, and the ticket office destroyed.