Korinthos (Corinth)
Big city half an hour north of Athens 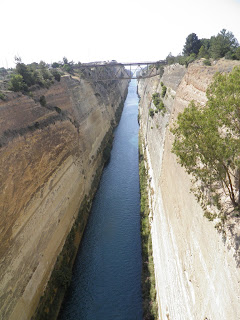 Corinth Canal  6.4kms (4 miles) long.  You can bungy jump off that bridge (or one of the others), if you wanted to.

Corinth is just under an hour an a half from Poros but not one of our favourite cities.  We go there if necessary to visit the hospital or shop at the big store called Jumbo.  Both are on the outskirts thank goodness.  We don't have to navigate through the one way streets and new pedestrian thoroughfares, a skill which even our GPS hasn't mastered.

We had to take a friend to the train station outside Corinth one Sunday and decided bravely to drink a coffee in the town, somewhere.  Sunday morning,  Shouldn't be too much traffic, no problem finding parking.  Yeh, right.  After glimpsing the sea at the end of one dead end street and the central square over the centre isle of trees and going round in circles we finally went the wrong way down a one way street and found parking near a street of coffee houses. 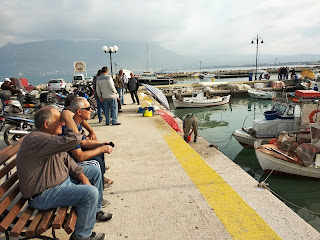 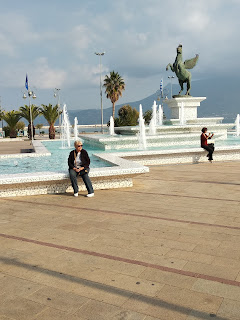 Pegasus
one of the squares has a huge fountain complex and a bigger than life size statue of Pegasus, the pure white, winged stallion of the greek myths
That's me sitting there 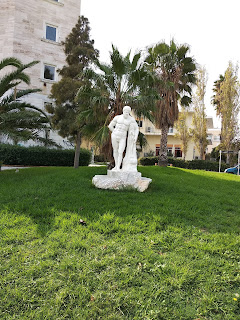 Boat repairs on a vacant lot

After coffee we drove up into the hills to a small village taverna in search of a rustic Sunday lunch. 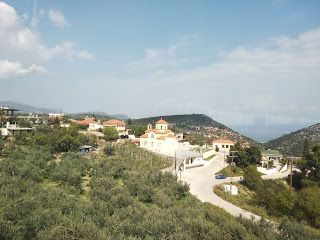 Village in the hills
Tiny village, huge church and the sea on the far horizon

Not quite what we expected however.  The meat seemed to have been roasted at least a day before and warmed up.  The homemade sausage was full of gristle and an overwhelming herb.  We ate the cabbage salad, tzatziki, toasted (bread is toasted when it is stale) and washed it down with a litre of local wine (drinkable) 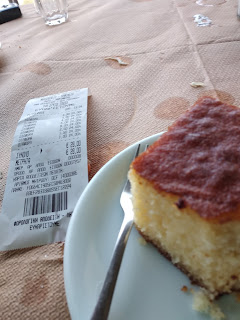 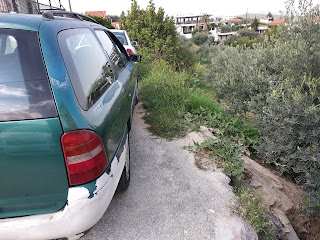