Greece in the news

Refugees cleared  to travel to Ireland -

440 refugees now have their papers to move on from no-mans-land in Greece to a new life in Ireland.

Ireland has agreed to take 4000 migrants under the Irish Refugee Protection Programme, half by the end of this year.  The relocation programme is also taking migrants from Lebanon and Italy.

Germany on the other hand is starting to send refugees they don't like back to Greece!

This small theatre will re-open on the night of the August full moon with a performance of the greek tragedy, 'Iphigenia'*, written in 406 BC by ancient greek playwright Evripides.
The theatre has been restored in recent years and holds about 2000 spectators.  It is situated in Northern Greece in greek Macedonia. 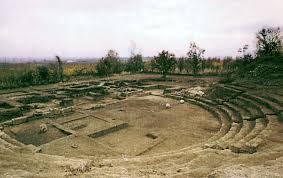 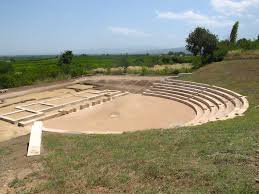 The ancient town of Mieza is thought to be where Aristotle taught Alexander the Great.

* Iphigenia was the daughter of King Agamemnon who was off to fight in the Trojan war.  Agamemnon offended the Goddess Artemis who in a hissy fit prevented the winds from blowing so he couldn't sail to Troy.  To appease her he was told to sacrifice his daughter Iphigenia.  So he did.  Nice people these ancient Greeks.

Our own little Theatre -

The little theatre of Epidavros was discovered in the 70's under a grove of olive trees.  The owner must have been thrilled about that.   I wonder if he got compensation for the loss of his olive trees and a lifetime of olive oil for his family.  Situated near the Port of Old Epidavros, it was used for theatre but also for religious and political events. 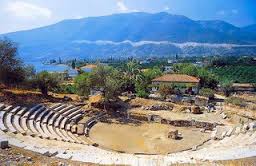 Epidavros is less than an hour from us and famous for the huge theatre which is on every tourists must-see list. 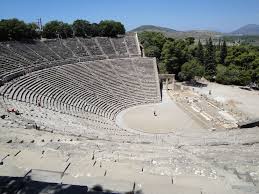 The small theatre's summer programme starts off with a performance of  'Cyclops', once again by dramatist Evripides.  This tragedy/greek drama is described as
'an all female production examining the land of the cyclops (giants) , a masculine, raw, violent world of mutual killing and man-eating'
Well, I sure won't be going out of my way to see that!

Did you know that August 2017 has 5 Saturdays and Sundays?  This happens once every 823 years