Meatloaf (rollo) with a filling of boiled eggs and cheese

This is a greek recipe which my mother-in-law used to make, though I am sure some version is made in many western homes. It has gone out of fashion, a 70s recipe, along with shrimp cocktail and cheese and pineapple on a toothpick and stuck in a grapefruit.  I remember when I served this at a small party just after first arriving here 40 years ago.  K's friends sort of stared at that concoction in mystifying silence and no-one touched those darn toothpicks. I found out later that Greeks did not eat sweet and sour, ie cheese and pineapple, and that also they are not willing to even taste something different.

I don't experiment when cooking for locals. They do not appreciate it and will suspiciously poke anything unusual on their plate, ask mistrustingly, 'wot's this' and leave it there staring me in the face, reminding me that I will always be a foreigner. 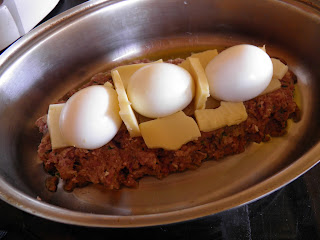 The bottom half of the meatloaf.  This is covered with the rest of the minced beef mixture

Easy, tasty and eaten by traditional persons, if the recipe has not been modified (no soy sauce and don't used marjoram instead of oregano!).  The meatloaf mix is squished together and about one third is laid out on the bottom of an oiled baking dish and formed into a loaf-like shape.  On top of the meat-mix press in as many boiled eggs as will fit.  Then arrange around the outside pieces of whatever cheese you have on hand.  I used Gouda (which melted and disappeared) and another hard, tasty greek cheese, kefalograviera.

Very carefully close the whole thing with the rest of the meat mix, pressing it over the top and around the eggs.  Close it up well so the cheese cannot escape and there are no gaps along the sides.

Fill the pan round the loaf with cubed potatoes and pour over a sauce of wine, olive oil, mustard, hot water and a little honey.

Mix really well altogether in a bowl.  I put my hands in there and give it a good massage

Bake about one hour and baste now and again with the sauce. 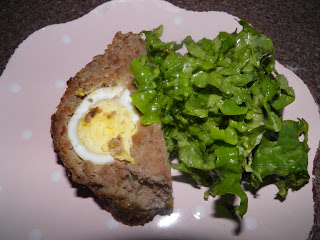 Yesterday I made fish soup and today I made the mix for fish cakes with the leftover fish and potatoes.

This is not a traditional greek recipe.  Traditional people poke these with their fork, eventually push them to one side and ask if there is anything else to eat.  They don't like fish pie either.

-Cooked deboned fish
-boiled potatoes mashed with a fork
-salt and pepper
-one egg
-one spoon of flour, may need slightly more flour if the mixture is very wet
-the zest of half a lemon
-chopped parsley or dill

Mix all this together with a fork till it is really well combined.  Put into the fridge for an hour.  I'm leaving mine overnight.

Form into little patties. Lightly flour and fry.  Delish, with a slight lemony tang.  Add a dollop of  mayo or tartare sauce or whatever your heart desires.

Serve with a salad and drink a glass of chilled wine, red or white.