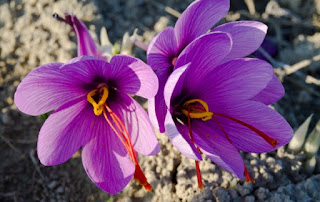 One kilo of dried  saffron threads needs about 150,000 flowers.  The farmers pick the flowers  one by one and then separate the flowers and the stamen.

There must be thousands of acres of these small flowers and they have to be hand picked and then processed.  No wonder genuine saffron is so expensive.

We use a yellow powder which is sold in a small bag in the supermarket for a euro and is labelled 'like saffron'.  The real krokos from Kozani is sold at 3.50 euros a gram.  Everywhere you read that it gives your dish a subtle spicy flavour and a  beautiful yellow colour.  I agree with the colour but have never noticed the taste.  We use the cheap powder.  Tumeric also gives a lovely yellow colour and is half the price.


- Ancient greeks helped make chinese clay soldiers?
In a BBC documentary a theory was outlined that Greek artists could have been present when the terracotta army was made.  Some of the statues appear to have been inspired by ancient greek  art.  Did greek sculptors instruct local chinese artists? 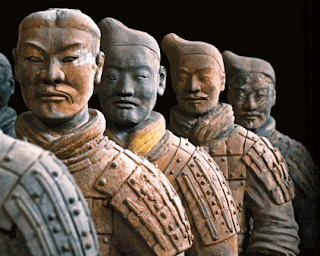 Alexander the Great and his army crossed the Hindu Kush between Pakistan and Afghanistan and carried on into India.  There is reputed to be a tribe in Pakistan which speaks a language very close to ancient greek.  Did some of Alexanders soldiers remain there and march on as far as China long before Marco Polo and the Silk Road?

- The poor are going back to the Mediterranean diet.
A recent study shows that the economic crisis is benefitting  Greek health.  So many people can no longer afford to eat out at restaurants or fast food places.  They are turning to fruit and vegetables, legumes, pasta and bread. Red meat and fish may be eaten once a week, lamb and goat once a month.  Those that have no income whatsoever 'dine' at a church or municipal soup kitchen and eat whatever is handed out. 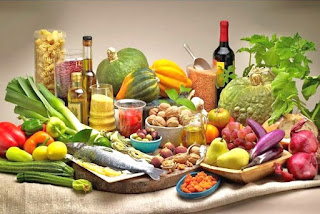 Dried beans, split peas and lentils are cheap and already a big part of greek cuisine.  In the villages these will be supplemented by greens which can be harvested from every field and roadside, whatever fruit, nuts and vegetables are in season, olives and white bread.  In the cities every large supermarket chain has its own  brand of cheap rice and pasta.  Seasonal fruit and vegetables can be found in the weekly markets, cheaper at the end of the day when the market is folding up.

The diet of the poor does not include fast food, processed food or sweets.  When they're thirsty they drink water.

My father-in-law would say ' a glass of wine, a piece of bread, a handful of olives and you're a rich man'.

-   Plans are 'aloft' to turn the wreck of the Titanic's sister ship, Britannic, into an underwater park for scuba divers.  The Britannic was sunk in 1916 by a german mine near the island of Kea.

The EU has already agreed on funding of 2.8 million euros for a museum, hotel and diving school.  The idea was shelved when the economic crisis began but now this underwater scuba diving attraction could bring tourists and much needed income.

Scuba diving used to be restricted in greek waters.  There are so many ancient underwater sites, so many treasures that could be scooped up and removed.  Before 2006 it was very difficult to get permission to dive with bottles.  EU laws then made greece relax its regulations.  Nowadays there are dive schools all over the country.  One such  school gives lessons in a swimming pool on our island and in the picturesque Bay of Love.  Diving is allowed everywhere unless it is an area where anitquities are known to abound such as in the sea around the sacred island of Delos. 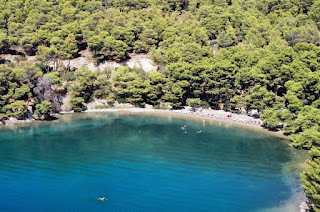 - Warships of the Hellenic Navy were  open to visitors for three days as part of the national celebrations of OHI day on 28th October. 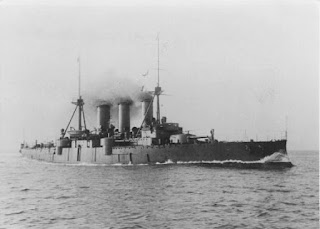 This is the warship Averof, moored for many years at the dock alongside the Navy School on Poros.  The ship was launched in 1910 and took part in the Balkan wars and then WWs 1 and 11.  She was decommissioned in 1952 and moved to Poros in 1956.  Until 1984 the Averof was a familiar sight on Poros.   She was then towed to Faliron, down the coast from Piraeus,  and turned into a floating museum.

There was a huge hole in the Poros landscape until a few years later when the destroyer Geraki was moved to Poros.     It too was then decommissioned and towed to Crete for scrap.

The next destroyer was the Velos taken by its captain and crew to Italy during the military dictatorship. In the middle of a NATO exercise in 1973 Captain Nikos Papas announced that he was withdrawing his ship and sailing to the port of Fiumicino near Rome as a protest against the junta.  The Italian government granted them asylum till democracy returned in 1974.  The Velos was taken away to be another floating museum and Poros has been left destroyer-less.

My son-in-law spent his military conscription scraping and painting the Velos and his uncle was one of the crew that 'mutinied'.

Four  ex-American navy Destroyers were given to the Greek Navy in 1951.  One of them was  the destroyer USS Eldridge which supposedly took part in the Philadelphia experiment.  It seems unsure whether the ship was the later renamed Aetos or  Leon.   The destroyer Aetos was  returned to the US in 1993 and turned into a museum.   Leon was sent to Crete for scrap.

K served 2 years on the Aetos as chief electrician. Besides the usual problems on an old ship he cannot remember any times

all of which I have read about after a google search.  Evenutally the ship was decommissioned by the Greek Navy and he was one of the skeleton crew which took it to Crete to await its tow to Amercia. 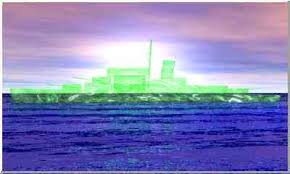 - Barack Obama
Yes, we had the Pope, Putin, Merkel and now President Obama is coming for a visit.  On his final trip abroad he will visit Germany, Peru and on Novemeber the 15th Athens Greece.  He and PM Tsipras will be discussing our struggling economy and he apparently will give greeks a pat on the back for being so generous to the 60,000 refugees stuck here in miserable 'holding' camps.