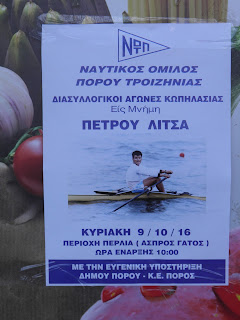 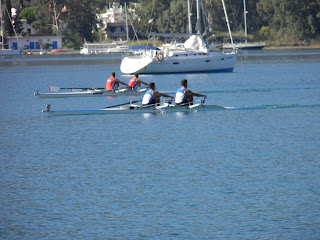 Rowing clubs from around our area took part in this rowing regatta for school children. 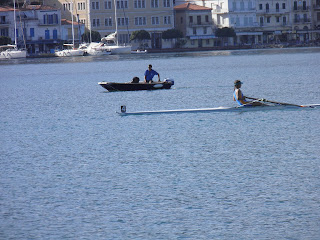 Rowing across the harbour. The races were over a distance of one kilometre.

Our Poros Team did really well and they all made that extra spurt just before the finish line as all the local supporters yelled, whistled and urged them on to plow through to gold. 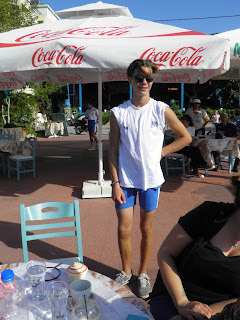 My grandchildren are rowers.  Above is George (Giorgos) at 15 almost 6ft tall and size 45 shoes. 1/4 kiwi, a griwi.  George came in third in the double skiff.  They might have made first place but were hit by the boat behind them at the starting line and lost time straightening up and getting in stroke again. 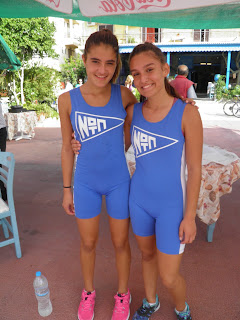 And Nels (Eleni, on the left), also 1/4 kiwi, another griwi, with her fellow rower in the double skiff.  They got a close second. 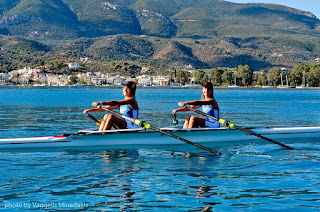 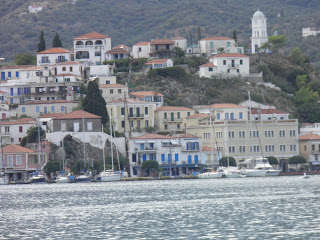 Poros from across the bay.

Poros has a history of producing champion rowers.  Mild weather and gentle (most of the time) winds plus the natural enclosed harbour are perfect conditons for  rowing, canoe and kayak.  Competitions in all these three categories are held annually here and our athletes take part in races all over the country.  The Naval school of Poros houses the boats (called shells), provides space for their gear and a gym for training though a lot of their training (on land) is done pounding along the harbour roads of Poros.

Naval officer Kostas Kontomanolis won 6th place in the single skiff in the 1984 Los Angeles Olympic games .  Local boy Dimitris Mougios with his partner in the double skiff got a silver medal in the 2008 Beijing Olympics.