This is the hub of the island, the action centre.   The locals leave on the early morning Flying Dolphin (hydrofoil) for their doctors' appointments in Athens.  Tourists arrive on the mid-morning Flying Catamaran, hauling their suitcases down the steep gang plank,  hoping to find a taxi, in this unfamilar place with the strange language, to take them to their accomodation.  The coffee drinkers in the cafeterias watch all this activity, noting who is leaving and who is arriving, and with whom.  News travels fast as in all small communities and soon blurs into plain old gossip. 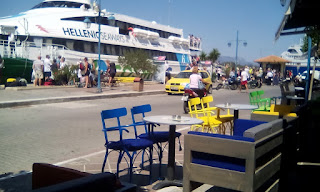 A five minute buzz of activity as the Flying Catamaran disembarks its load of Poros people before continuing on to Hydra, Ermioni and Spetses. 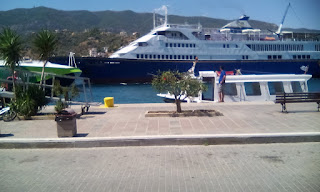 Meanwhile the Anna Maru leaves for the next island, taking the tourists on a daily three island cruise.  The boat stays in Poros for one hour and everyone tries to make some money from these rich travellers.  Today the passengers seem to be American (the women with pink or blue rinsed hair and the men in checked bermuda shorts) or, Middle Eastern, the women covered from head to foot in long flowing shirts and skirts, their heads covered by a scarf.  The head covering is not so remarkable here where the older women wear head scarves.  This tradition is dying out but K's old aunt wore a white scarf which went over the top of her head, under the chin and tied on top.  That was normal day attire whether at home or in the fields.  My mother-in-law wore a black scarf knotted under the chin. 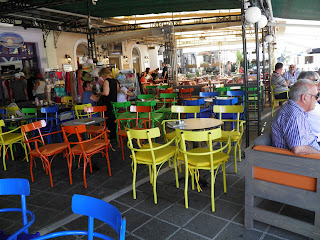 The 'Happy Chairs', otherwise known as Tiropoulos Cafe.  One of the many cafeterias along the front.  Every cafe has a different clientele and you frequent, or not, each cafe according to who owns it, what sort of people gather there and only after that do you consider the flavour of the coffee or the coldness of the beer. 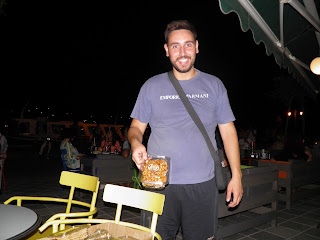 This young lad travels through the Peloponese selling his family's home made pasteli.  This is a sweet made from sesame and honey and apparently coming from the time of Homer's Iliad.  He comes to Poros in the summertime from Ancient Olympia, selling his sweets in the cafes in the balmy evening air when  everyone is full of moussaka and relaxing with an after-dinner drink.  He's cheerful, non-pushy and his sesame sweets are delicious and so healthy.  Lots of vitamin E and calcium. 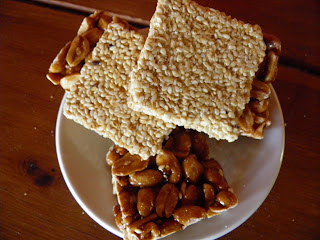 These are squares of sesame pasteli and also some made with honey and pistachio nuts. 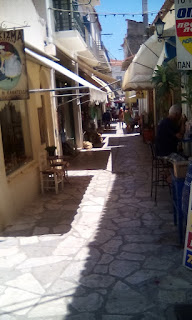 Souvenir alley.  Or it used to be.  In the golden days of the 80's this alley way was full of souvenir and gold shops and crammed with tourists.  At times you could hardly push your way through the mass of shoppers.  Nowadays there is only one souvenir shop at the  start of this back alley and one jewellery shop for the tourists.   For us locals there is an inviting cake shop whose buttery sweet aroma clouds the odour of the meat and fish market, a place selling local products, a craft shop, the old style taverna with its pots and pans of todays traditional greek dishes displayed in the window, a hardware shop a couple of clothing shops and a hairdresser. 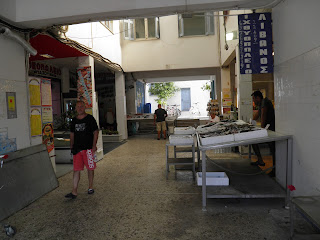 The meat and fish market.  This has been cleaned up a lot.  Years ago great chunks of meat were hung up on hooks in the open air, your steak was cut by a butcher with a cigarette in his mouth and they sprayed fly spray straight at the meat to keep off the flies.  Now the meat is in glass cases and the fish on ice. 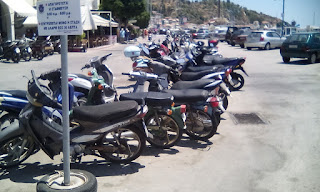 Parking for all the motorbikes, the preferred method of transport on the island in the summertime. 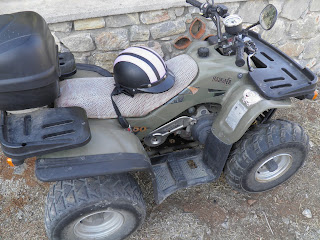 My four wheeled quad bike.  It's on the slow side and a bit noisy but gets me up and down the hills and I can go down all the little narrow streets and alley ways and park almost anywhere.  I can even take a passenger, as long as they're short and under 30 kilos  ie a small child.  The quad bike is as tough as a donkey.  I've hauled 6 packs of water, crates of beer and great piles of garden rubbish.  Perfect vehicle for the island.