Mini tomatoes
Cherry tomatoes have come into fashion in the last few years in Greece.  I even had a couple of plants in my garden this summer.  They were the only ones to produce.  I have seen round red and yellow minis (as they are called here) but now the shop down town has green.  I had to try them even if they were selling at 2 euros a kilo, one euro more than the normal tomatoes. 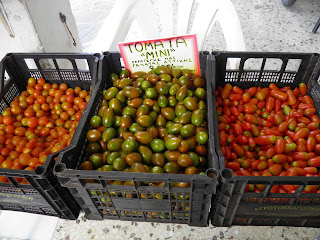 Unfortunately though tasty , all these mini tomatoes had very tough skins.  I googled and found an easy recipe for grilled tomatoes and they were tasty enough to reccomend.

I cut each 'mini' in half and put them in a baking tray lined with waxed paper.  Waxed paper might be environmentally unsound but for me it is a godsend.  The baking dish often does not need washing and nothing sticks.

I sprinkled over the tomatoes a little salt, some squashed garlic, oregano, a little sugar to take away that acidic taste and a little olive oil.  15 minutes in a very hot oven and they were ready.

Next time I think I will use fresh basil instead of oregano, skip the olive oil (there is enough liquid with the juice from the tomatoes) and maybe sprinkle over a little tasty cheese and garlic powder.

You could do this with any tomato, cut in half.  A great side dish. Or layer them on top of pastry or pizza base, cover with cheese and hey presto a tomato tart.  Not  traditional greek but something , maybe, a traditional greek might eat even though mama would have thought mini tomatoes a freak of nature. 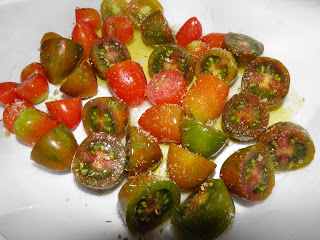 The tomatoes ready to go into the oven

Vaso is still collecting dried carob beans from every tree in the neighbourhood.    She is up before dawn drinking coffee and smoking her first cigarette while listening to the early news of the day.  We often hear her radio or TV at 4 or 5am as we stagger into the loo and then stagger back to bed.  She sits outside in the morning to smoke come rain or snow.

At first light she is off to feed the goats some dried carobs, let the hens out and water the dogs, before going out into the fields.  Lately she has been checking up on her grapevines.  Harvest time is getting near and it is essential the fruit is in the best condition for this years wine. Next task is the collecting of carobs from all the trees in the neighbourhood. She makes the rounds of the trees regularly now as the beans dry and fall to the ground. 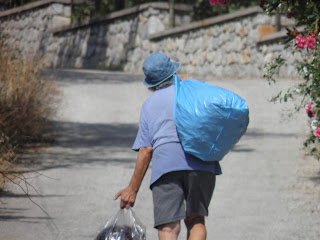 Hauling carobs for the livestock

Often there will be a short stop at our house on the way back.  The bags full of carobs that she heaves over her shoulder are extremely heavy.   She will pause for ten minutes, have a glass of water, a cigarette and a grumble about the latest news on the financial front and then scuttle off up the incline with her load of carobs.  Carobs are the new super food we hear.  A small carton sells for 5 euros  in Athens.  They certainly plump up Vaso's goats. 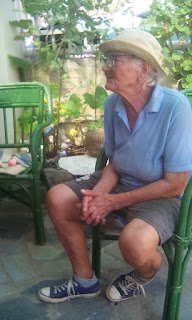 Time for some social intercourse
The carob bean is quite sweet.  Break it in half and try chewing on the flesh.  It is used as a substitute for cocoa though could never give you that rich, satisfying chocolatey shot of the real bean that soothes the nerves and ignites the senses.

To make flour or 'cocoa' powder with them is one helluva task.  The small brown seeds in the middle have to be removed so the bean must be boiled for ten minutes to soften them.   Then cut down the middle and take out the seeds.  The beans must then be dried, either in the oven or the sun.  When dried out again put in a food processor or grinder and turn them into powder.  Maybe next year.

Cucumbers are in season and cheap.  K's cousin at the fruit and veg market always puts an extra half dozen in the bag.  We eat them, give them away, put them in the juicer with other abundant fruits of the summer harvest and now I pickle them as well.

In a jar:
sliced fresh ginger (because I like a tang)
garlic squeezed (because I live in greece)
2 parts vinegar
1 part water
slices of cucumber
If they are too strong then add more water.  Put the lid on the jar and give it a good shake. 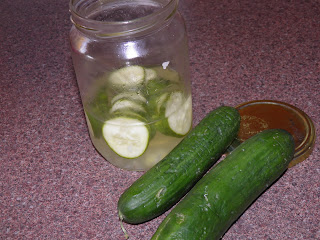 I would put in the amount of cucumber that you can eat in a couple of days.  They do get stronger the longer they are in the pickling juice.  They also get softer.  I make these an hour before we need them and put them in the fridge.  They are cold and hold just the right amount of pickle for my taste.

Beware: traditional greeks may not eat them.

It seems to be an american thing, these fresh cucumber  pickles, though I do remember my mother in the summer having a plate of sliced tomatoes and cucumber doused with vinegar on the dinner table.  This is one of my memories of a NZ summer down at the bach (nz holiday home) on Papamoa beach.

This little bach made out of an old garage was built by my father and a friend and was/is located right on Papamoa beach, a long expanse of sandy beach and sand dunes in the North Island .  It cost them about 250 pounds in the 1950s and was one of a few scattered shacks at that time.  Lo and behold that little bach, now called Pipi Palace, is still there in almost the same state, out of place  beside the beautiful show homes, and is now  worth a million or so. Unfortunately it is no longer owned by our family but  is a place of pilgrimage whenever any of us return to NZ.

Email ThisBlogThis!Share to TwitterShare to FacebookShare to Pinterest
Labels: Vaso and the carobs