Migrant, émigré, displaced person, asylum seeker, political refugee or economic refugee, you name it, they're still coming.  All borders are closed, there is no way into Europe and Europe doesn't want them.

There are detention camps in Hungary, Slovenia, Croatia, Serbia and Macedonia with hundreds of migrants trapped in limbo.  In Greece there are over 50,000 migrants.  Thousands are on the Macedonian border in an unhygenic and rundown city of canvas, thousands are camped along Pireaus harbor and many thousands are in'reception centres' and transit camps run by the army all over the country.

On the Macedonian border those rash enough to make it through or over the wire are given rough treatment by the Macedonian border guards and sent back to Greece.  Meanwhile locals are apprehensive about what will happen in this volatile situation and have bought out the (hunting) gun stores.

Fighting amongst refugees on the islands and in camps is a daily occurrence.  Afghans are no longer considered political refugees, will not be accepted by any European country and  could be sent back to Turkey.  The afghans attack the Syrians who are now the only valid asylum seekers.

Clashes between refugees and locals is also common.  Islanders want their livelihood back as summer approaches and tourist bookings drop.

Under a new EU agreement Turkey will be given  billions of  euros to help it provide for the refugees already in Turkey.  Under this agreement economic refugees in Greece will be returned to Turkey.

45 young men from Pakistan, Egypt and Iraq were deported this morning.  Not even a drop in the ocean.  Boats are still arriving from Turkey every day with more asylum seekers.  5 people were drowned today off the coast of Samos.

What Greeks are doing.  Welcoming spring and paying more taxes. 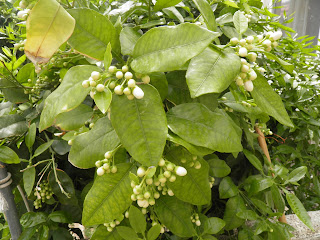 Blossom on the grapefruit tree.   Hundreds of bees are buzzing round the blossom and the perfume is exquisite. 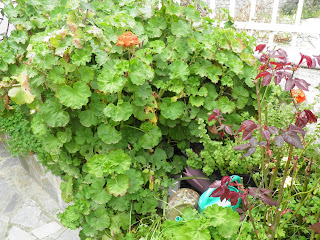 Geraniums red (and delphinians blue), before the garden clean-up 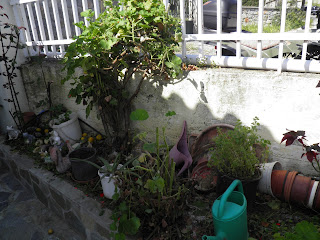 And, afterwards.  Room for the mint to flourish and take over 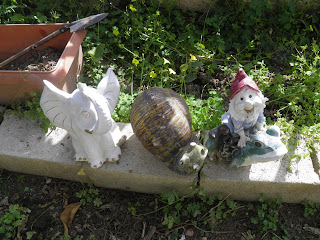 Some of my garden friends
The snail in the middle is from our short excursion into Bulgaria a few years ago. 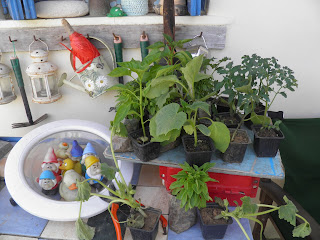 Ready for planting.  Basil, tomatoes, zucchinis, peppers and aubergines...and a few more of my garden gnomes. 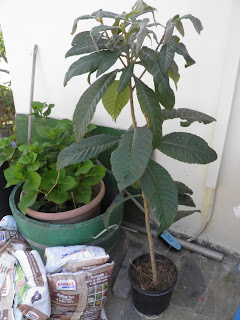 A medlar to be planted in the garden.  The medlar fruit is orange, about the size of a walnut and has two big stones in the middle.  You peel off the tough skin and eat the flesh.  Very nice, sometimes a little tart but delicious none the less.  The stones can be put straight into a pot (like this one) and grow very easily.