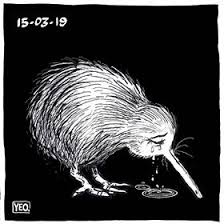 This sad little kiwi has appeared all over social media

The news coverage here in Greece of the horrific shooting was extensive.  So many greeks know the country close-up because of visits or immigration.

Every news report emphasised the peacefulness, the friendliness, the cleanliness!  A lot of it was over the top.

My cousin Jenny wrote
'As a country, the common feeling is one of disbelief, yet a horrible awakening that we are truly part of the global scene, and no longer immune to the shocking events taking place all over the world'

Numerous tales were told....... you can walk barefoot, in the grass, on the sand, to the shops or around the supermarket.  Ask my daughter Danae.    I think she wore jandals (flip flops) half a dozen times when we last visited.  The pavements, the grass, the parks are clean!

We heard about the NZers who fought next to the greeks during the 2nd WW, their bravery in the battle for Crete.

We heard that people  still leave their doors unlocked .. wishful thinking probably nowadays, but I'm prepared to be wrong

I sometimes think that living on a greek island is similar, yet so foreign .  It's safe here.  Crime, they used to say, was committed by tourists, usually robbing other tourists.  I wouldn't agree to that anymore but  violent crime here is  unknown and we do leave our doors open (with caution)
and keys in the car.

The police, some said, took a while to respond but that is because NZ police do not carry guns and the Armed Defenders Squad had to check the area was safe before allowing in other services.

I hope that what came out of all these  news reports was in the end a positive message and NZ will still be thought of as an awesome country to visit .  As an ex-pat of 46 years it's still my south sea island paradise. 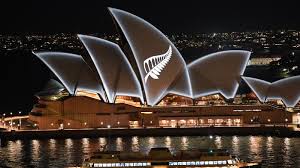 Sydney Opera house
Support from across the Tasman Sea