Our friends the russians

On the other hand the Russians are making their presence felt in an entirely different way.

On our way back from medical appointments in big city Nafplio last week we stopped to light a candle at newly consecrated church of Agios Loukas.

A modern day saint, born in Russia as Valentin Felixovich Voino-Yasenetsky.  Died 1967.  Exiled, imprisoned, tortured, humiliated, as was the custom then, he continued curing patients and practising his religion (Russian Orthodox).

We had heard a lot about this church so we thought we'd go and see what all the fuss was about.  The church has only been used for services for the last five months.  The inside pillars are covered in paintings of Russian and Greek saints.

Money for the building of the church was donated by Greeks living in Russia.  A team of Russian artists did much of the painting and wood sculpture. 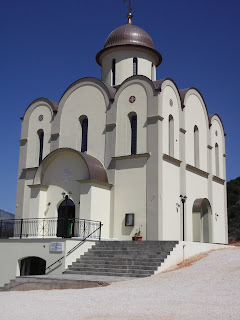 Built in the Russian style this church is a gleaming white edifice in the middle of nowhere.  It is amazing how many churches here are situated in such rural settings.  I presume some faithful follower donates 20 stremmata (greek unit of land measure) of their olive grove or vineyard so the church can be built.

From what we've heard if you want a church built on your land and have it consecrated and recognised by the Greek Orthodox church you must also donate a certain amount of land around it to the diocese, 20 stremma.
As if they need more real estate 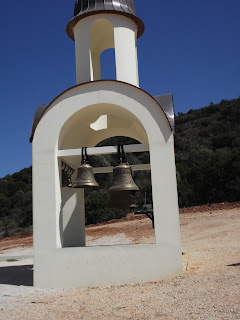 The belfry, off to one side of the church 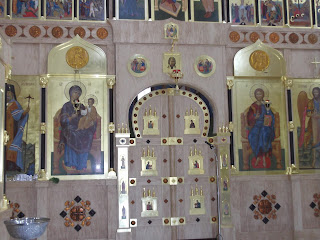 Front of the church.  The icons and frescos are called a harmonious mix of Byztantine and Russian technique 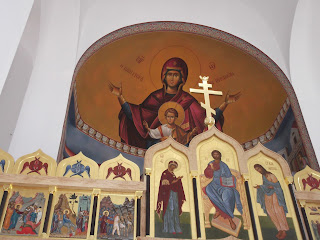 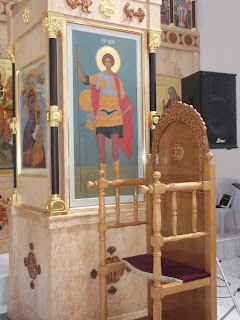 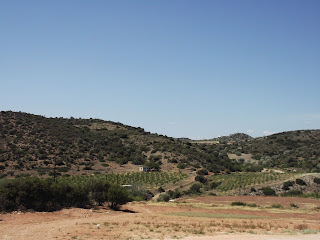 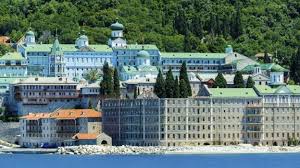 Russian monastery dedicated to Agios Panteleimonos. Looks big enough to be a small village.
Last year it celebrated 1,000 years.  Both Putin and Patriarch Kirill of Moscow attended the cermeonies.  Once there were more than 2,000 monks.  Now there are 70 Russian and Ukranian  monks. 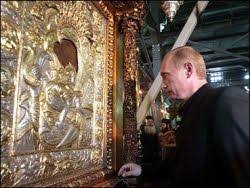 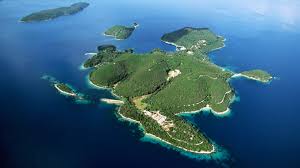 Skorpios, a private island in the Ionian sea once owned by Aristotle Onasis.  Now leased for 100 years to the daughter of a russian billionaire.


The Kremlin's wine is made on the Holy mountain in Greece.

Putin first visited Mt Athos ten years ago and tasted the wine made in the vineyards of the Holy Mountain.  He was so impressed that the wine, called Kormilitsa Gold, now carries the title of 'The Official Wine of the Kremlin Moscow'.  Bottles bear the Kremlin coat-of-arms.    Putin and his high level foreign guests are offered this limited production on important occasions.

Bravo Greece, you've come a long way since retsina (white wine preserved with a lump of pine resin).  But I still prefer neighbour Vaso's wine in the old plastic coke bottle, especially when she gives it to us free.