Run from the Sun

That last heatwave was the worst I have  had to endure. Heatwaves are a norm here in July and August.  You drink more water, go for a swim or two, do any necessary outdoor work early in the morning, close the shutters,  have a long siesta and socialise late at night when the sun has long gone down. 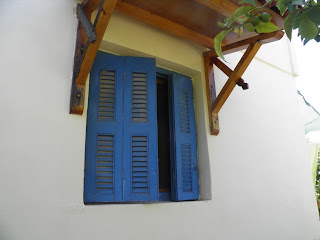 This time there was no getting away from that exhausting non-stop heat.  At 8 in the morning I had already had a sheen of sweat glistening on my forehead.  Nights were unbearable .  Fans blew hot air, air condition never seemed to cool  quite enough.

We finally could stand it no more and on the last day took to the hills.  We had done this once before in similar heat and found relief up near the (winter) snow fields and the forests of fir trees. 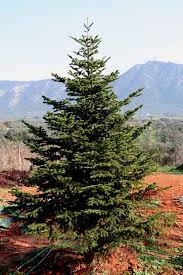 We were on the 7am car ferry, air con in the car working even at that early hour.  Two hours later we sighted our first 'norfolk pine'.  I'm not sure if they are norfolk pine, but these fir trees, called 'elata' in greek grow  in the mountains.  That first fir tree told us it was time to turn off the air con, open the car windows and enjoy the rest of the day!

We found cheap rooms in a little mountain village with stone houses, surrounded by pastures of green grass, and sat in the square under  shady green oak trees.  Iced coffee, a cool breeze and new faces to check out.  Bliss 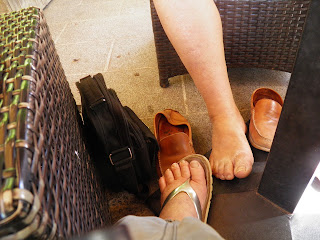 We literally took off our shoes and relaxed 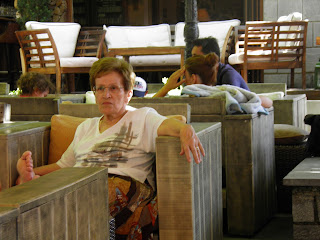 Some relaxed more than others.  This woman had taken her shoes off and rested her bare feet on the coffee table.  Not exactly the most appropriate thing to do in a cafeteria in a public square 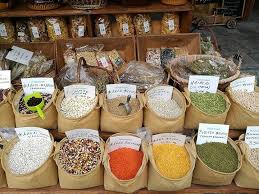 Open sacks of lentils, beans, split peas, rice and herbs.  I bought red lentils, 3 euros a kilo.  In the supermarket they are 4.50 for half a kilo.  They will need a good wash though.  I wasn't too sure about those open bags.  Everything non persishable used to be sold this way but health laws now forbid it...in most places 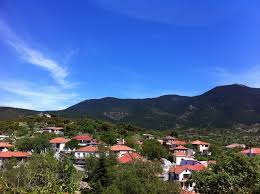 The tavernas in the tourist village were very expensive and we were not impressed by the menu.  After a long siesta we took off for another little village nearby which we had visited years ago.  Population 114 in 2011. 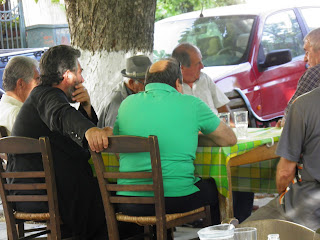 The men had gathered in the town square to play cards and pass the time in good natured discussion and gossip.  The one in black is the village priest.  One of the lads (ta palikaria) 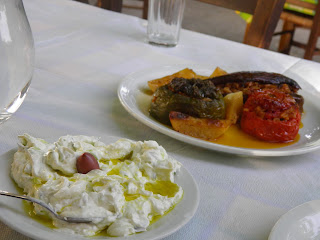 We started off with coffee but soon ordered a jug of wine and something to eat.  These are stuffed tomatoes with the plate of tzatziki.  Of course we didn't stop there.  A half kilo of grilled lamb chops helped to fill up a few empty places. 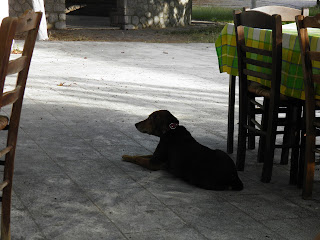 No the dog didn't get the bones.  He had disappeared by that time.  A cat turned up so we gave her a few morsels and suddenly there were four cats, and another dog.

Next day the heatwave broke and we returned to high winds which are still blowing, presumably from the north because they are definitely cooling.  Suddenly we need top sheets on the bed and closed windows at night.  K says this wind is the 'meltemi'.