Hanging out the blue and white Greek flag for National Day.  The flag is called the 'galano-lefko', the 'blue and white'.

There used to be a law that every house must fly the flag on National Days.  Our traditional person makes sure ours is always flying a few days before. 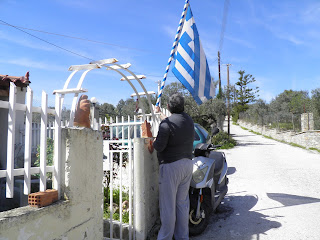 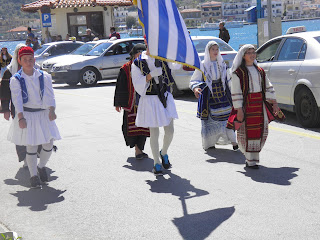 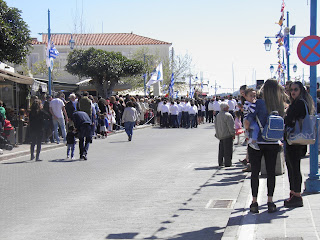 Most of the island turns out to watch the children parade and lay wreaths at the War Memorial.  The cafes are full and ouzo is a popular drink with a small meze before carrying on to friends and relatives who are celebrating their name day today.  Vangelis and Evangelia 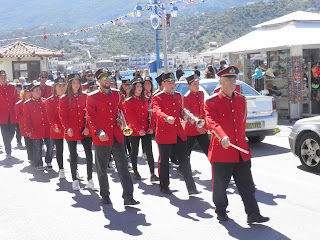 The Municipal Band sets the pace and plays the National Anthem 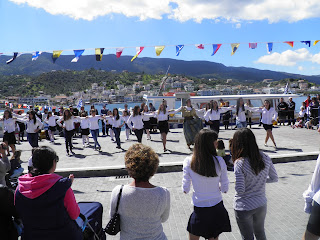 After the parade along the waterfront the school girls put on a show of traditional Greek dancing, some of them wearing the local dress. 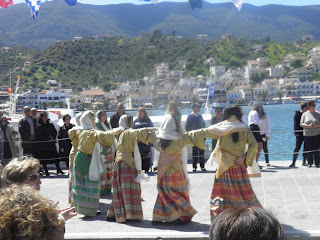 25th March is a double celebration.

The Greek Orthodox church celebrates the Annunciation, when Archangel Gabriel told Mary that she would be the mother of  Christ.

The Greek people also celebrate the successful war of independence fought against the Ottoman Empire (the Turks). 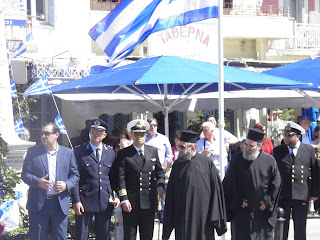 Bigwigs.
The Commander at the Navy Base and escort, Chief of Police, Chief of Harbour Police, Mayor, Councillors. 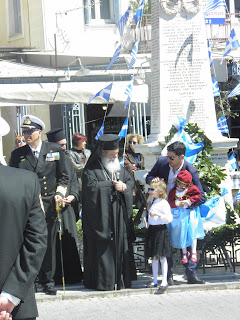 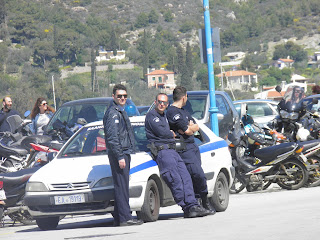 Police on guard, guns in holsters 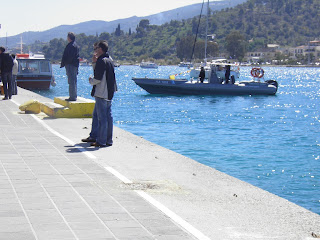 We will watch the parade and wreath laying and then go across the waters to eat salted bacaliaros (cod) with Vangelis  (son-in-law's brother) whose name day it is today.  When our daughter married Kyriakos we all became a member of their family as well and nearly always celebrate these holidays together, whether at their house or ours.

It is still Lent of course but fish is allowed today and traditionally it is fried salt cod (soaked in water for two days to de-salt it) and garlic sauce.   It looks like fish n chips with mashed potato but it definitely is not.   The battered fried cod is usually cold by the time everyone gathers round the table and the 'mash' is strong with garlic and vinegar, and oily.

Once again Maiden Aunt, Eleni, 85 years old, fried the cod, over 50 pieces and her sister Tasia made the skorthalia (garlic sauce). 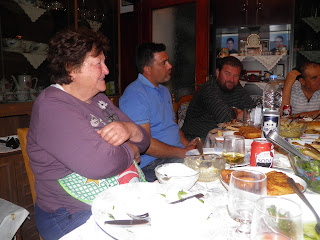 Vangelis had made a huge baking dish of samali which is a semolina cake with no eggs, butter or milk.