Last night the goats came.  The whole herd of rogues.  Big fellows most of them with that stinky, musky billy goat odour.  First came the noise.  Late at night I was spooked to hear scrabbling, gnawing, things being mangled and torn.  It was close up sound, just outside the (firmly closed) shutters in the garden.  When I got up courage (K was away) to actually open the shutters there they were just beyond the fence, dozens of big burly goats, ripping out the bougainvillia which hung over the railings, jumping up on the old audi to strip the olive tree of its low lying branches, lapping up all my squash plants which were trailing along the road and scrambling up on to Vaso's wall trying to reach the carobs.  I bravely ventured out into the garden to shoo them further away but after a short gallop down into the fields next door they were soon back again.  After making sure they couldn't actually get into the garden I left them to it.  Luckily the english neighbours had closed their gate and repaired their fences otherwise the herd would have trimmed all their recovering trees and flowers down to ground level and left a load of manure for them all over the balcony. 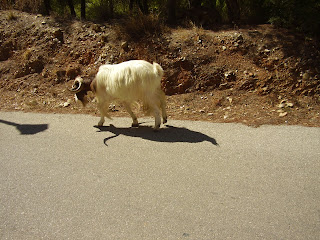 
So, that was the end of my squash.  I was going to pull out all the plants anyway.  We had plenty of flowers but the actual squash grew to a few inches and then rotted away.  Today the rains came and maybe the squash would have taken a turn for the better but the goats had already been to work and have saved me the trouble of making pumpkin pie this year. 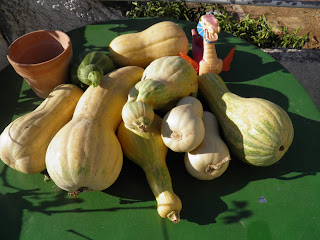 
I'll look again for real pumkin seeds next spring.  Squash is good but nothing like the genuine floury, orange pumpkin so marvellous for roasting.

My mother-in-law always made sweet pumpkin pie.  First of all the squash had to be grated and then drained.  Next came the homemade pastry. This  huge ball of pastry (flour and oil and water) was rolled out with great expertise to a thin filo with a long rolling pin resembling a broom handle.

The grated pumpkin was mixed with raisins, cinnamon, fine bread crumbs to absorb any moisture left from the grated flesh, lots of sugar, olive oil of course, some crushed cloves and then poured into the pastry lined baking dish.  More pastry on top and into the oven.

I have stopped making it, preferring to turn the squash into soup or puree but maybe it is time to honour the old tradition and make a sweet spiced pie.

The world's largest Greek salad weighing 20 tons and 10 kilos has been put together in Moscow.  Of course it broke the Guiness World Record.  Somewhere in Red Square there were 20 tons and 10 kilos of tomatoes, onions, cucumbers, peppers, olives and feta 'sprinkled' with oregano and 'drizzled' with olive oil.

This russian/greek salad was part of a year long celebration of the thousand year friendship between Russia and Greece. One thousand volunteers took two hours to cut up those tonnes of tomatoes and cucumbers and finely sliced one ton of onions.  I guess they ate it all afterwards as well.  I hope the Russians paid for it all and it wasn't put on our darn tax bill.

Author of the bestselling book 'The Island' set on a leper colony on a small island near Crete is now writing a book based on travels around the Peloponse, the lower half of the greek mainland.  This new work is to be called 'Cartes Postales from Greece'.  The main character travels around  this southern peninsular and presumably sends home post cards telling everyone what a wonderful place it is.  You will (I will) have to read it and find out.

I love the Peloponese and till recently we travelled around the whole area ourselves whenever we got the chance.  We are lucky on Poros.  A five minute ferry boat ride and we are on the mainland, the Peloponese, and then it's just turn left or right and keep on driving.  There is so much more to experience here than on a dry Aegean island.

The peninsular has history oozing out of every rock.  There are pine covered mountains, small stone houses clinging to rocky ravines, seaside villages, long sandy beaches, rocky inlets,  rivers, waterfalls, a wonderful scenic train, ancient Olympia and big touristy cities like Nafplio (just over an hour from us). You can drive at your own pace, stopping at family cafes where you still have to use sign language to order a coffee and capuccino is not on the menu.  You can follow the Wine Road or the Trail of Pan.  I still have a lot more to see there myself but most of all I love the high moutains, so cool especially in the middle of summer when the rest of Greece is suffering from a heat wave.

And now it is time to leave you for a new Hercule Poirot episode is starting.  English language, greek subtitles.  I do love an english programme (as opposed to an american one).