Some more comments on the greek situation

Banks are open again but only to take in our money. Cash machines still give out daily rations of 50 or 60 euros. Bills are paid in this once cash society without money changing hands, simply transfers of numbers from bank account to collecting office.

Meanwhile the news is full of the dastardly plots of the left wing to return us to the drachma. Lafouzanis, leader of the extreme far left of the ruling party, dreamt up a wild scheme to invade the Bank of Greece, arrest the Governor and relocate 2 or 3 billion euros to be used to run the country while the drachma was being printed and distributed.

Varoufakis, outspoken ex-finance minister had plans to hack into his own ministry's computers in preparation for Greece’s exit from the eurozone.

Grumbling European partners suggested that Greece sell off its uninhabited islands, the Acropolis and other famous antiquities to pay back its creditors. French tourists at the archealogical site of Lindos on Rhodes demanded free entrance saying their country was owed billions by the Greeks and they had no right to ask for more. Security guards refused them entrance.

Tax inspectors are making sweeping checks all over the islands and inland resorts. In Crete the archealogical site of Knossos was found to be one of the islands big tax evaders. There was no official record of money coming in and no tickets being issued. After an inspection of all archeological ruins in the country it was found that only 2 of the ticket machines were connected to the tax revenue office. Millions of tourists visit these sites every year and they all belong to the Ministry of Culture. The government's own ministry was in violation.

There has been great and witty debate about the logic behind these taxes. General agreement - there is no logical explanation.

23% tax is supposedly only on luxury goods. This includes the carob and 'mountain tea' . The latter is a herb gathered for eons by the greeks from the hillsides and considered a fragrant healing infusion which they drink daily. Carobs are fed to the goats.

Leave these absurdities for the greeks to debate. The month of August is the peak of the holiday season. Sun is guaranteed every day. Souvlaki is still cheap with or without salt. There are dozens of cultural festivals this month especially on the islands. You can enjoy performances of ancient greek plays at the 2500 year old theatre of epidavros. Grape harvest festivals have already begun. Bathe in the romance of the August full moon at midnight on the Acropolis. Come and enjoy Greece. 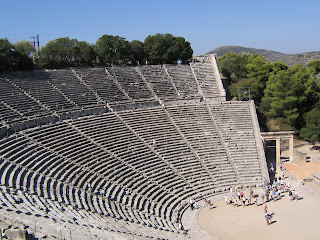